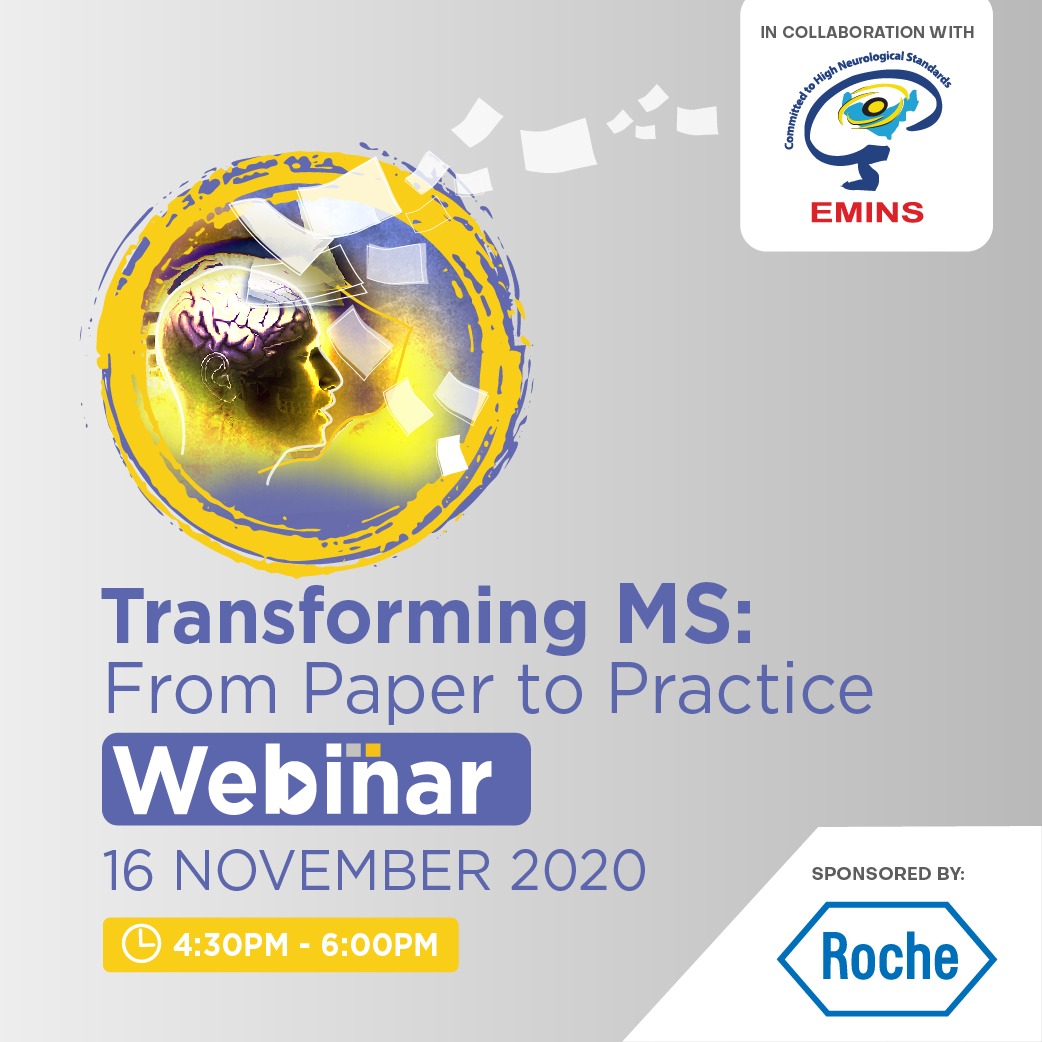 The webinar was wealthy with the presence of experts and a lot of updated practical knowledge on multiple sclerosis. Despite being a working day, 167 people attended the webinar. The webinar was conducted in a very useful and informative manner and it has received a great deal of acceptance.

Dr. Reem AlSuwaidi has focused on the topic of real world experience in ocrevus patients’ early switch with some evidences and case presentation. She explained the data collected from Opera 1 and Opera 2 Open Level Extension Study over six years. The study included patients using Interferon and patients using Ocrelizumab. According to her analysis, gradual switching to Ocrelizumab has proved that patients have approximately less than one relapse in 20 years. It also benefited in the clinical disability progression. After 24 weeks, it is continued to improve throughout the six years. Switching to Ocrelizumab results in an almost complete and sustained suppression of MRI disease activity. Compared with switching patients, patients initiated and continuing OCR had a larger decrease. Assessing 48-week confirmed EDSS disability progression helps to establish the enduring effect of Ocrelizumab beyond the traditional 12- and 24-week assessments, and moreover demonstrates that the efficacy gap is wider at this point than at the earlier time points. It also demonstrated 57% risk reduction in the EDSS clinical disability progression. Patients initiating Ocrelizumab instead of Interferon derive a significantly greater disability benefit that is maintained over time. Earlier treatment with Ocrelizumab lowers brain tissue loss over time compared with later Ocrelizumab initiation. Switching from Interferon to it is associated with robust reductions in MRI-measured disease activity.

Dr. Reema explained the case of a 37 year old Emirati female, who has been presented with imbalance, weakness and bladder symptoms in 2006. She deteriorated and was unable to walk without assistant. Most of the currently available therapies were not available till 2018. She was only switched to Ocrelizumab in April 2018. However, her EDSS remained stable at 6 in 2020. She ended the session by reminding the importance of switching patients to the appropriate treatment at the appropriate time.

Dr. Ali Mohamed Hassan has emphasized on the role of Ocrevus in Naïve and switch patients. He shared two case studies and early high efficacy disease modifying therapies in multiple sclerosis. First case study discusses the condition of a 32 year old male, suffering with symptoms since 2009. His Expanded Disability Status Scale (EDDS) was just 1 when he seen in Dr. Ali’s hospital for the first time. The patient was given Natalizumab and Dimethylfumarate with periodical MRI brain and spine. They started applying Ocrevus since 2018 and after three months, he was almost asymptomatic except for fatigue by the end of the day. According to Dr. Ali, the patient visited the infusion center in August 2020 for the sixth dose of ocrevus infusion and current EDSS is 2.

Second case study has discussed situation of a 27 year old male, who has been working in ADNOC with heavy machine. He had attack of diplopia in 2014 and paresthesia attack in 2019. He has evidence of dissemination in time, and also has dissemination in space with evidence of plaques in juxtacortical, periventricular, posterior fossa and spinal cord. Treatment started with first dose of Ocrelizumab in July 2019 and the patient was given another two doses in February 2020 and August 2020. It is observed in the follow up that the patient has no symptoms and has EDSS of 0. According to Dr. Ali, High-efficacy therapy commenced within 2 years of disease onset is associated with less disability after 6-10 years than when commenced later in the disease course. This finding can inform decisions regarding optimal sequence and timing of multiple sclerosis therapy.

After the interactive question and answers session, Dr. Jihad Said Salim Inshasi expressed his appreciation and sincere gratitude to the members for facilitating the webinar.